There are a couple of ways to test Rust smart contracts in NEAR.

This document will cover the first two in detail, and link to various code examples to refer to. Keep in mind that there are some simple examples located at our examples page that implement these tests.

Unit tests in Rust are quite an important part of the development lifecycle of smart contracts. Yes, they test individual parts of the source code to verify expected behavior, but they're also part of the iteration process.

Let's take a step back for a moment. Perhaps a developer has gone through the (amazing) online Rust book already. In the first chapter it introduces the command:

In the context of the Hello World app of that chapter, this makes sense. cargo run will hit the entry point fn main() and print "Hello, world!"

However, when writing smart contracts there is no entry point like this. In this sense, writing a smart contract in Rust is more similar to writing a Javascript WebAssembly app, where the primary Rust file is considered a library and is stored in src/lib.rs instead of src/main.rs like the book's Hello World example.

In the absence of cargo run and the entry point, unit tests may become the primary way to quickly check that your code is behaving properly. And while there is no println!() on the blockchain, the tests can freely use it for debugging purposes if desired.

This slide demonstrates a possible approach to a newcomer to Rust and smart contracts: 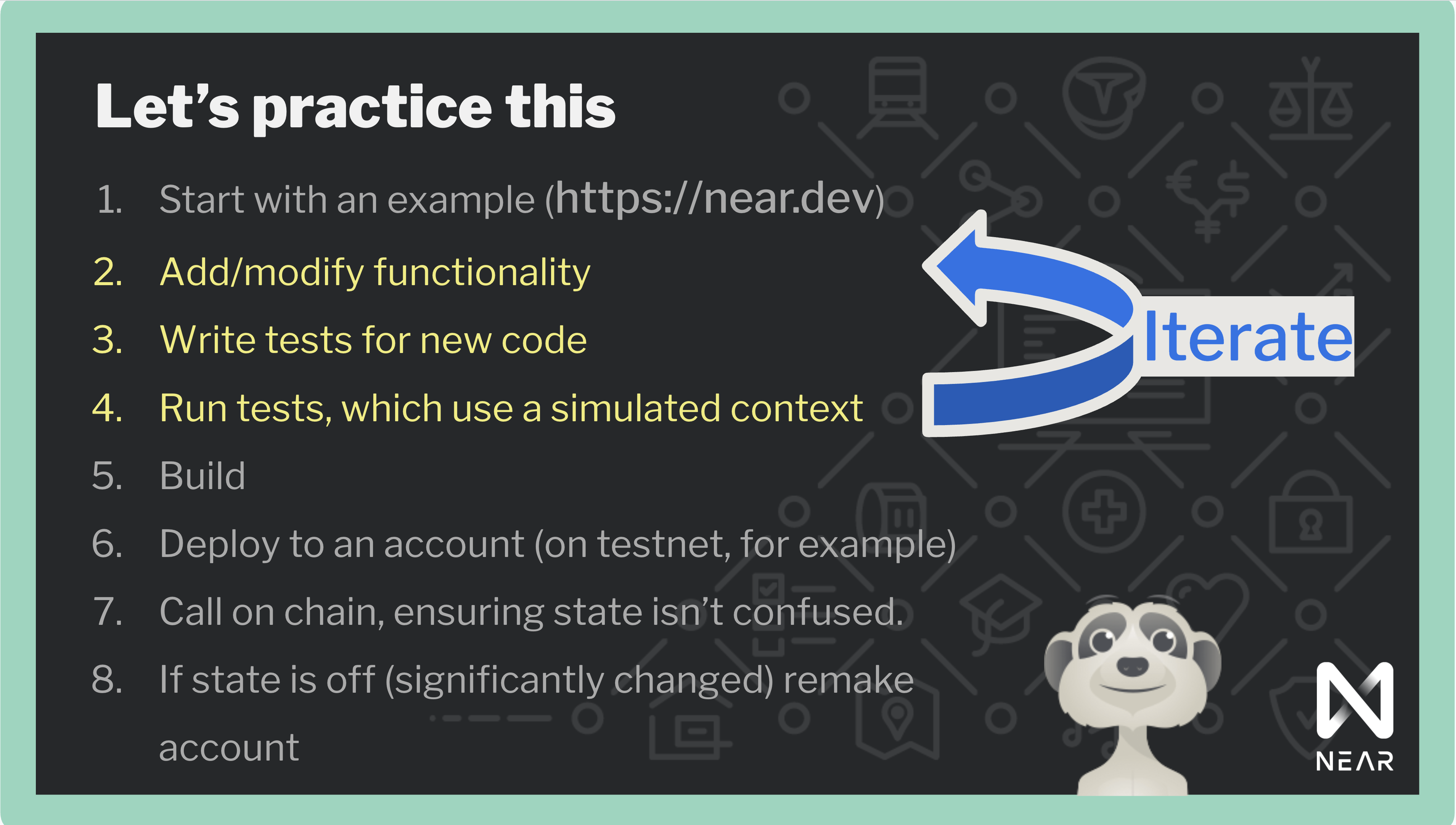 Let's take a look at a sample of code that may appear in a simple Rust smart contract. (This code is taken from the non-fungible token contract.)

If all the code to the contract is contained in one file (src/lib.rs) this is typically found at the bottom of the file. Below is somewhat boilerplate code that sets up the VMContext for a mock blockchain:

The important thing to remember is VMContext will be sending mock transactions with the context specified above. So if a unit test needs to send a test transaction coming from Alice, and then another from Bob, the get_context method may be called to change the signer_account_id or predecessor_account_id, or whatever the contract needs.

Following the get_context function are any number of tests. These use the #[test] macro above test functions. Unlike other testing frameworks, the function name can be anything and doesn't have to fit a pattern or naming convention. In the above code block, there is a comment // Tests that will contain test code like this:

Look for the ⟵ in the above code snippet to understand a typical pattern of writing unit tests. This will be quite different in simulation tests, which will be covered later in this document. In summary the pattern could be boiled down to:

Let's add another test, but this time one that's expected to fail.

Note: each unit test is indepedent of the test before it. If the previous tested added values to a Map, they will not persist on subsequent tests.

The --nocapture flag will make sure that output from assertions and macros like println!() will be show in your terminal / command prompt. If you'd like to customize or limit which tests run, please see the documentation here.

In summary, unit tests are a great way to make sure that the methods and data structures in your smart contract are working as intended.

Within near-sdk-rs there is a library near-sdk-sim that allows simulation testing for Rust smart contracts. With this utility you can:

For a step-by-step guide and more information, see the README file for near-sdk-sim.

This is where the rubber meets the road. End-to-end tests will help determine if the application is behaving as expected allowing us to see the entire flow of an app from start to finish. Unlike the previously mentioned tests, here we will use a live network (i.e. "testnet") (with actual tokens) to view (in real time) how our code behaves and any problems we may encounter. There many are testing applications that can accomplish this, but for our purposes we will focus on the Jest testing suite.

Jest is a JavaScript testing framework that allows us to write and execute tests by writing simple JS functions. These tests have the following basic structure:

As you can see there are two main components.

Note: For more information on getting started, be sure to check out the Jest Docs.

If you are starting a new project using create-near-app Jest will be automatically installed as a development dependency and will be configured to run end-to-end tests. If you explore the package.json file you will see that the "testEnvironment" for Jest is set to "near-cli/test_environment". In addition to this, there is a file test.near.json in the neardev/shared-test directory. This file contains an account_id as well as a private_key that is required for performing these tests.

Lets take a look at an example of end-to-end tests from the NEAR Guest-Book example. Here we have included two additional features to our tests.

These are two examples of complete end-to-end tests that:

These Jest integration tests can be run on both AssemblyScript and Rust contracts.

Got a question? Ask it on StackOverflow!