At some point you might want to call functions on existing contracts. This is called a cross contract call. There are plenty of reasons to do this:

Cross contract calls are really similar to calling an external API in the web 2.0 context.

In this tutorial we will build a very simple example to get you up and running with cross contract calls.

For this example, we'll only implement the add functionality, but already we've got a problem! The accounting department at Super Evil Mega Corp sent all these numbers as strings. To make things worse, we don't know how long these strings are going to be. Why this is a problem: the largest integer that JavaScript can deal with is 9007199254740991. To help out everyone who wants to add long numbers together, we're going to deploy a contract that people can incorporate into their own calculators.

When this opens in GitPod, the code will generate a unique NEAR account for this project and build then deploy the template files. You can take a look at what we're starting with by clicking "Open Browser" to see the token example running.

This sample project has a token smart contract and also some JavaScript tests that invoke smart contract functions. You can try running these tests right away to see the code interacting with the blockchain.

Once finished, the tests running in your terminal will appear like this:

Note that test-account-XXXXXXXXX_tTIMESTAMP-XXXXXXX here is an automatically generated NEAR account for this particular project. Don't be distracted by these details, just compare the developer log output with the statements in the file src/test.js.

We are not going to keep any of the code from this template. It's just there as a starting point.

We're interested in writing only one function for this example. A function that takes in two strings a and b and returns the result of adding them together as a string.

Now that we've modified files in our assembly folder we will need to re-deploy the contract.

In your terminal windows

That's it for our Calculator for now.

Step 3 - Write some tests for the contract

It's a good habit to test code as soon as we've finished writing it, so that's exactly what we're going to do.

Once finished, the completed test in your terminal will appear like this: 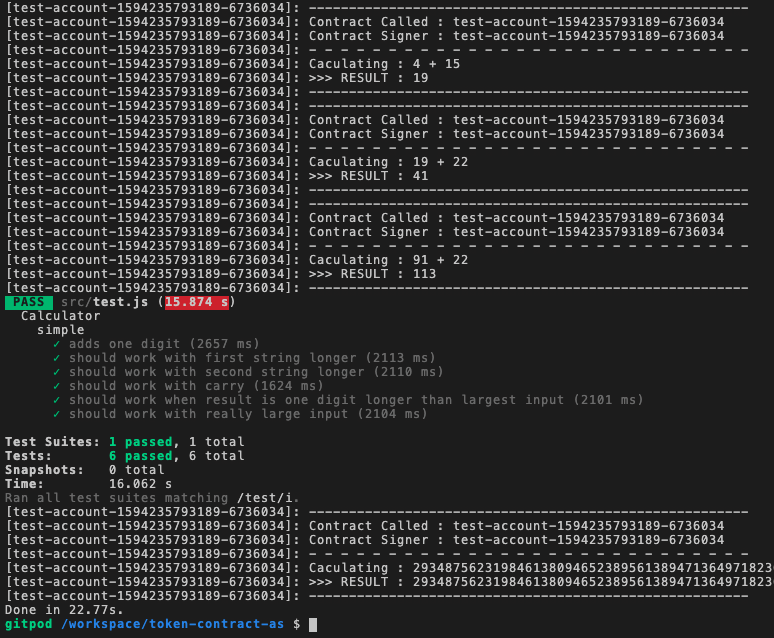 Just make a mental note that the in the logs, "Contract Called" and the "Contract Signer" are the same. This will be important later.

Normally, we would create a UI at this point, but since we're calling this from elsewhere, let's move on the the second contract.

Keep the tab open that you've been working on, you're going to need the ID of the contract you just created later.

The rest of the ID is the prefix "dev-" to be something like dev-159372XXXX-XXXXXXX. In fact the ID of the contract is just the NEAR account created for the contract by Gitpod automatically.

You can read more about accounts on the NEAR platform here.

So let's make another smart contract. Following the same steps as before in a new tab or window...

We're doing this because we need to create an entirely separate contract deployed at a different address to demonstrate the capabilities of cross contract calls.

We want to implement code that actually passes the numbers over to the contract we're calling. Here we're going to do this by creating a single callAddNumbers function and add the piping which allows us to make this function work.

We're going to need a few things to make this happen:

This will allow us to encode arguments to send between contracts as a single value.

Next we'll create the API that we can use to call the contract we've previously deployed.

Here, we're creating a single method add that takes the strings we want to add and returns a ContractPromise.

We're also using the AddArgs model we created to package the strings we want to send to the other contract. When we call args.encode() it's a lot like something like JSON.stringify(args) to allow us to send this data.

In order to create this ContractPromise, we need to know:

As a reminder, using the previous contract (the tab you kept open earlier), find the ID of the contract. You will use this to replace dev-REPLACE_THIS_IDENTIFIER.

You can find your contract ID stored in neardev/dev-account.env. In addition, you will see your contract ID displayed in the first terminal window with the running server. Towards the bottom there will be a line that stats: "Done deploying to dev-1594333XXXXXX-XXXXXXX".

Next, we're going to use the CalculatorApi we just created.

You may notice this function returns void, which is a bit confusing because the contract is returning a promise. This is because it's calling a function elsewhere and the compiler thinks it's void.

(In future releases this will be changed.)

Now save your changes and redeploy the contract

Then navigate to your terminal windows

Let's make sure things are working as expected.

Now let's test it out!

You should see a successful test that looks something like this:

Remember when we took a note that the 'Contract Called' and the 'Contract Signer' were the same in the test environment? Notice that they are different now! Can you figure out what this means?

You can also view the details of your account & transactions by using the Near Explorer.

This is a simple example of a contract that calls another contract, but this opens up a lot of opportunities.

Now, see if you can figure out how to build the frontend by checking out our other tutorials and modifying src/main.js and src/index.html.

You're ready to cross as many contracts as you want! Happy coding! 🚀