Actions (including sending NEAR)

We're going to introduce a new Action: Transfer. In this chapter, we'd like the first person to solve the crossword puzzle to earn some prize money, sent in NEAR.

We've already used Actions in the previous chapter, when we deployed and initialized the contract, which used the DeployContract and FunctionCall Action, respectively.

The full list of Actions are available at the NEAR specification site.

By the end of this entire tutorial we'll have used all the Actions highlighted below: 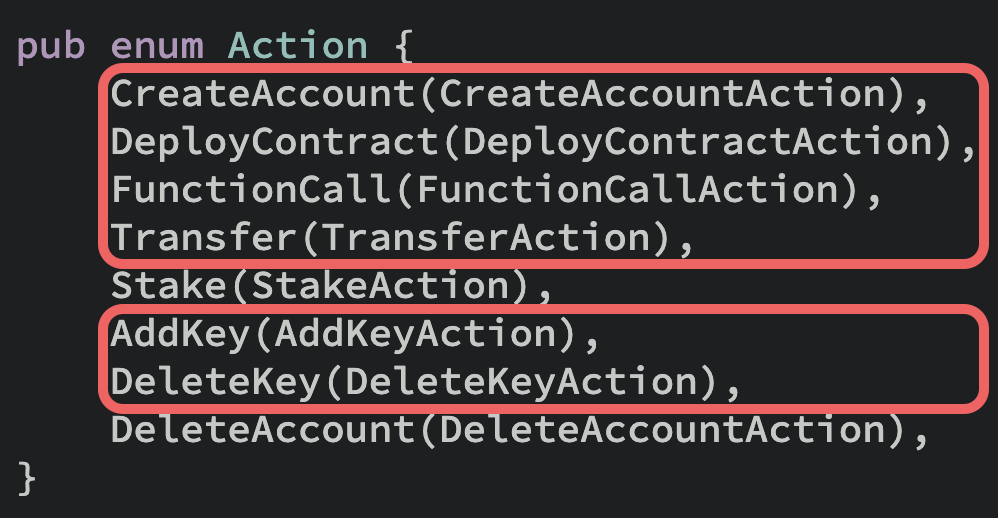 Actions from within a contract​

When we deployed and initialized the contract, we used NEAR CLI in our Terminal or Command Prompt app. At a high level, this might feel like we're lobbing a transaction into the blockchain, instructing it to do a couple actions.

It's important to note that you can also execute Actions inside a smart contract, which is what we'll be doing. In the sidebar on the left, you'll see a section called Promises, which provides examples of this. Perhaps it's worth mentioning that for the Rust SDK, Promises and Actions are somewhat synonymous.

Actions only effect the current contract

A contract cannot use the AddKey Action on another account, including the account that just called it. It can only add a key to itself, if that makes sense.

The same idea applies for the other actions as well. You cannot deploy a contract to someone else's account, or delete a different account. (Thankfully 😅)

The only interesting wrinkle (and what may seem like an exception) is when a subaccount is created using the CreateAccount Action. During that transaction, you may use Batch Actions to do several things like deploy a contract, transfer NEAR, add a key, call a function, etc. This is common in smart contracts that use a factory pattern, and we'll get to this in future chapters of this tutorial.

At the top of the lib.rs file we'll add this constant:

As the code comment mentions, this is 5 NEAR, but look at all those zeroes in the code!

That's the value in yoctoNEAR. This concept is similar to other blockchains. Bitcoin's smallest unit is a satoshi and Ethereum's is a wei.

In the last chapter we had a simple function called guess_solution that returned true if the solution was correct, and false otherwise. We'll be replacing that function with submit_solution as shown below:

Note the last line in this function, which sends NEAR to the predecessor.

The last line of the function above ends with a semicolon. If the semicolon were removed, that would tell Rust that we'd like to return this Promise object.

It would be perfectly fine to write the function like this:

When writing a smart contract you'll commonly want to use env and the details it provides. We used this in the last chapter for:

There are more functions detailed in the SDK reference docs.