Before diving deeper into the intricacies of Web 3 development, let’s explore what it is and why it exists. First of all - what does number 3 mean? The World Wide Web, or Internet in general, has evolved through the years and can be loosely divided into the 3 “generations”:

In this guide we’ll demonstrate some of these Web3 principles in practice and show how to build an application, in which digital assets are decentralized and owned by users.

As we already briefly discussed, the current Web is highly centralized, and mostly built using client-server architecture on centralized servers hosted on one of the clouds (AWS, Azure, GCP, etc). According to one report, 90% of mobile traffic goes to the clouds, which means a significant portion of the Internet is basically controlled by a handful of companies. This consolidation of power has a number of downsides and this article on "Why Decentralization Matters" does a good job explaining some of those problems.

The first decentralization revolution happened in file sharing, with the arrival of the (in)famous BitTorrent protocol. By being a p2p protocol, it’s truly decentralized, and allows data to be stored distributedly without any central authority (and sometimes without consent of a central authority, which caused a lot of drama, but that’s a story for another time). Ideas behind this protocol have been used in modern decentralized file storages like IPFS and FileCoin, we’ll come back to this later and explore it in more details.

The next revolution happened in the world of finance. For a long time transferring money required a central authority (banks), which would monitor, approve and execute these transfers. This has changed when the first cryptocurrency - Bitcoin - appeared. As already mentioned BitTorrent protocol, it also uses p2p communication, but instead of files it operates a transaction ledger, which is stored as a blockchain. Blockchain structure is needed to ensure that stored ledger cannot be altered, and at the same time to incentivize storage of this data. Unlike BitTorrent, Bitcoin network participants are rewarded for their services using a process called “mining”. This created a foundation for a new form of currency - digital currency (or cryptocurrency), with a unique property that it doesn’t need a central authority to function. Instead, users themselves maintain and operate it. And as with the previous decentralized system, BitTorrent, central authorities have issues with this.

Following the success of Bitcoin, other cryptocurrencies started to appear. The most important one is Ethereum, which took the concept of blockchain one step further and adapted it to store not just a transactions leger, but any kind of data, and, most importantly code (which is just another form of data). Basically, it turned out we can use it as a decentralized database transaction log. And if we have data and code living in the decentralized database, the only thing we lack to build a decentralized application is an ability to execute this code. So Ethereum did just that, and a Smart Contract was born. Now, let's dive deeper into the world of blockchains, smart contracts, and explore how we can build decentralized applications with them.

Let's start with a brief overview of what blockchain and smart contracts are.

In classical Web 2.0 applications, you need 2 things to build an application backend: a database to store data and a server to execute your code. The same is true for the Web 3.0, but instead of a database we have a blockchain, and instead of a server we have smart contracts.

Blockchain itself is just a linked list (chain) of transactions. As a performance optimization, instead of linking individual transactions, they are grouped into blocks. Linking happens using hashes - each block contains the cryptographic hash of a previous block. Such a structure grants us an important property - we cannot modify an individual transaction inside a chain, since it would change its hash and invalidate all transactions after it. This makes it an ideal structure to store in a decentralized fashion, since everyone can quickly verify the integrity of a transaction on a chain (and of the entire chain).

It’s important to remember that every transaction on blockchain is publicly visible, so sensitive data should be encrypted beforehand.

But how do we put transactions into a blockchain? That’s the purpose of a Blockchain Node. Everyone can set up their own node, connect to the p2p blockchain network, and post new transactions. Also, this node provides access to the current blockchain data. 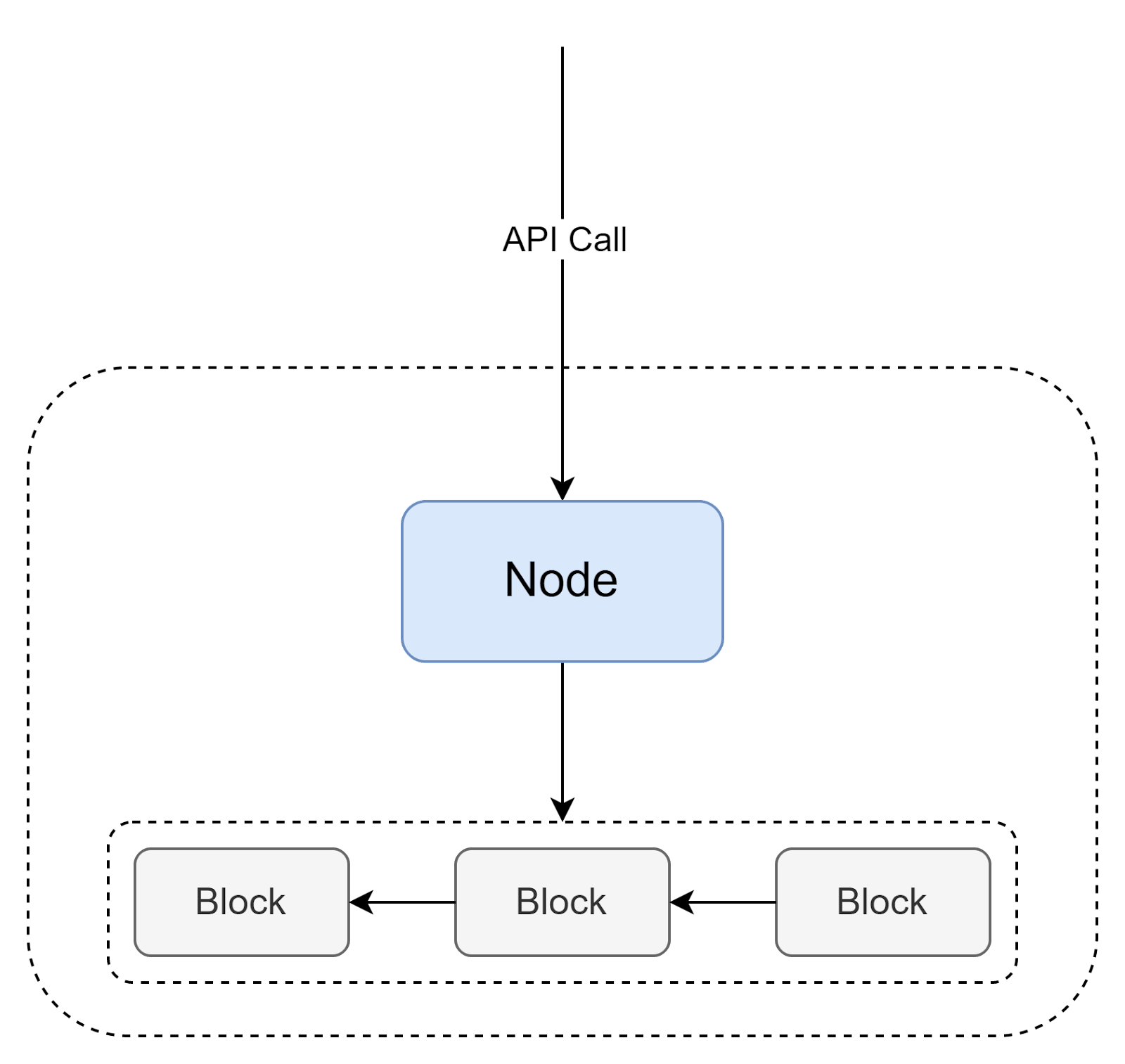 Blockchain transactions themselves can be of a different type; exact supported types depend on a specific blockchain network. In the first Blockchain network, the Bitcoin, which stored only a financial ledger, transactions were quite simple - mostly just transfers of funds between accounts. This works very well for decentralized financing (Bitcoin is still the most popular cryptocurrency), but if we want to build general-purpose decentralized applications (or dApps for short), we need something better. That's where smart contracts come into the stage.

For Web 2.0 developers, a good way to think about a smart contract is as a serverless function which runs on blockchain nodes, instead of a traditional cloud. However, It has a few important properties:

Such properties allow us to make analogies with real-world legal contracts - they cannot be changed (usually), they're predictable and they're publicly accessible for participants. Smart contracts are basically such contracts, or agreements, but instead of a human performing actions, they are represented as code.

But how do we deploy and execute them, if everything we can do is to create a transaction? All we need are 2 specific types of transactions:

When a call transaction arrives on a node, it will read the contract's code and state from the blockchain, execute it, and put a modified state back on a chain (as a transaction). 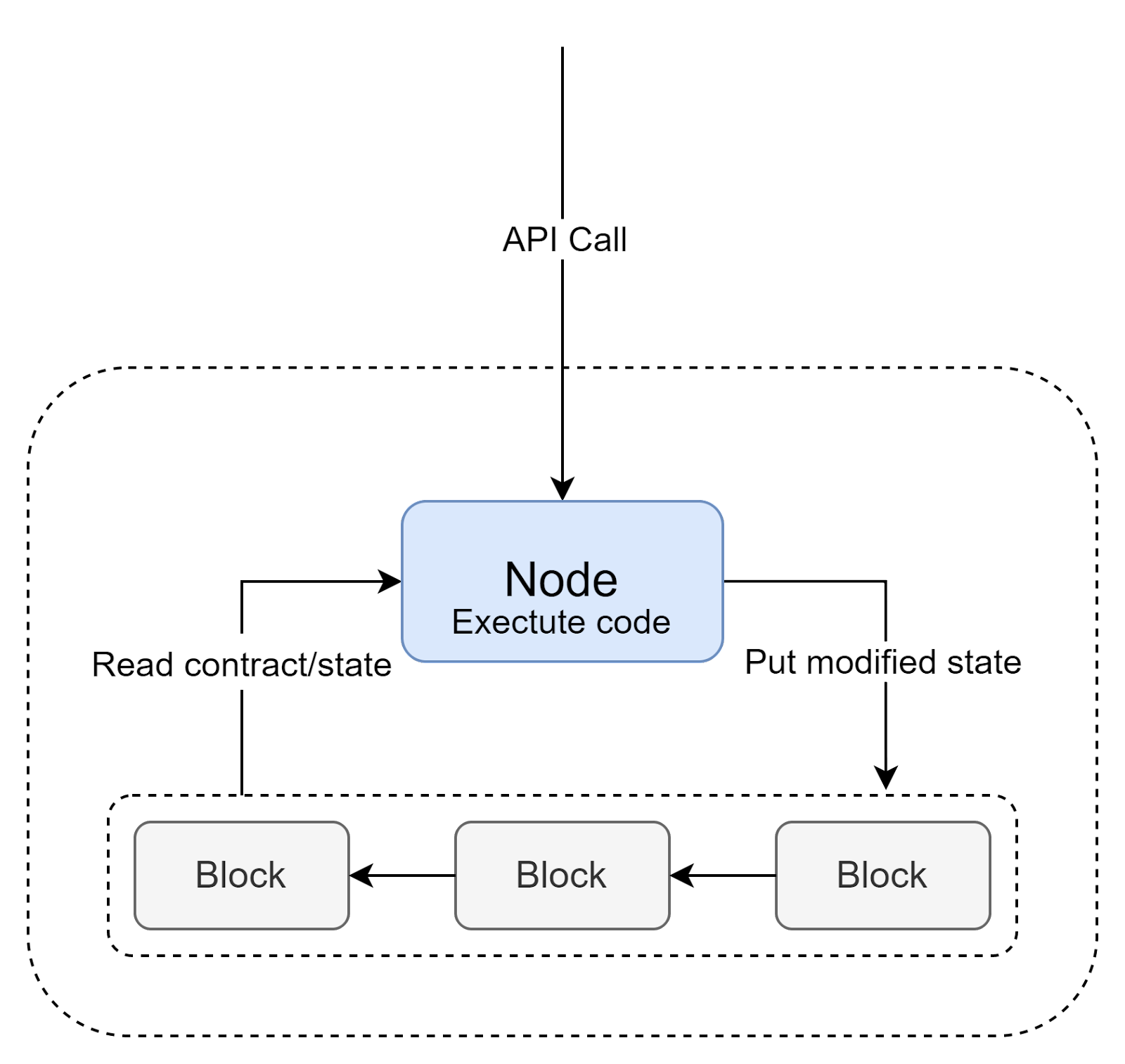 So far we’ve explored how the backend layer of a dApp looks like, but what about the client side? Since we are using an API to communicate, we can use any kind of a client we use in the Web 2.0 - web, mobile, desktop, and even other servers. However, an important distinction lies with users.

In a traditional Web 2.0 application, each server owns the identities of its users, and fully in control over who can and can’t use its services. In blockchain, however, there are no such restrictions, and anyone can interact with it (there are private blockchains, but we’ll leave them out of scope).

But how do we perform authentication if there is no standard login/registration process? Instead, we use public key cryptography, where a public key serves as a username, and a private key is a loose equivalent of a password. The major distinction is that instead of a login procedure, in which the server verifies the credentials and grants some form of an access token, here the users sign transactions with a private key. This means there's no classical Web 2 identity (like username, email, or an ID) available. This should be considered if you are building applications that require KYC.

Another important implication of using private/public key pairs for auth, is that they cannot be easily memorized, like username/password pair. For this purpose, special applications called wallets are used. They store user’s key pairs and can sign transactions or provide them for other applications. 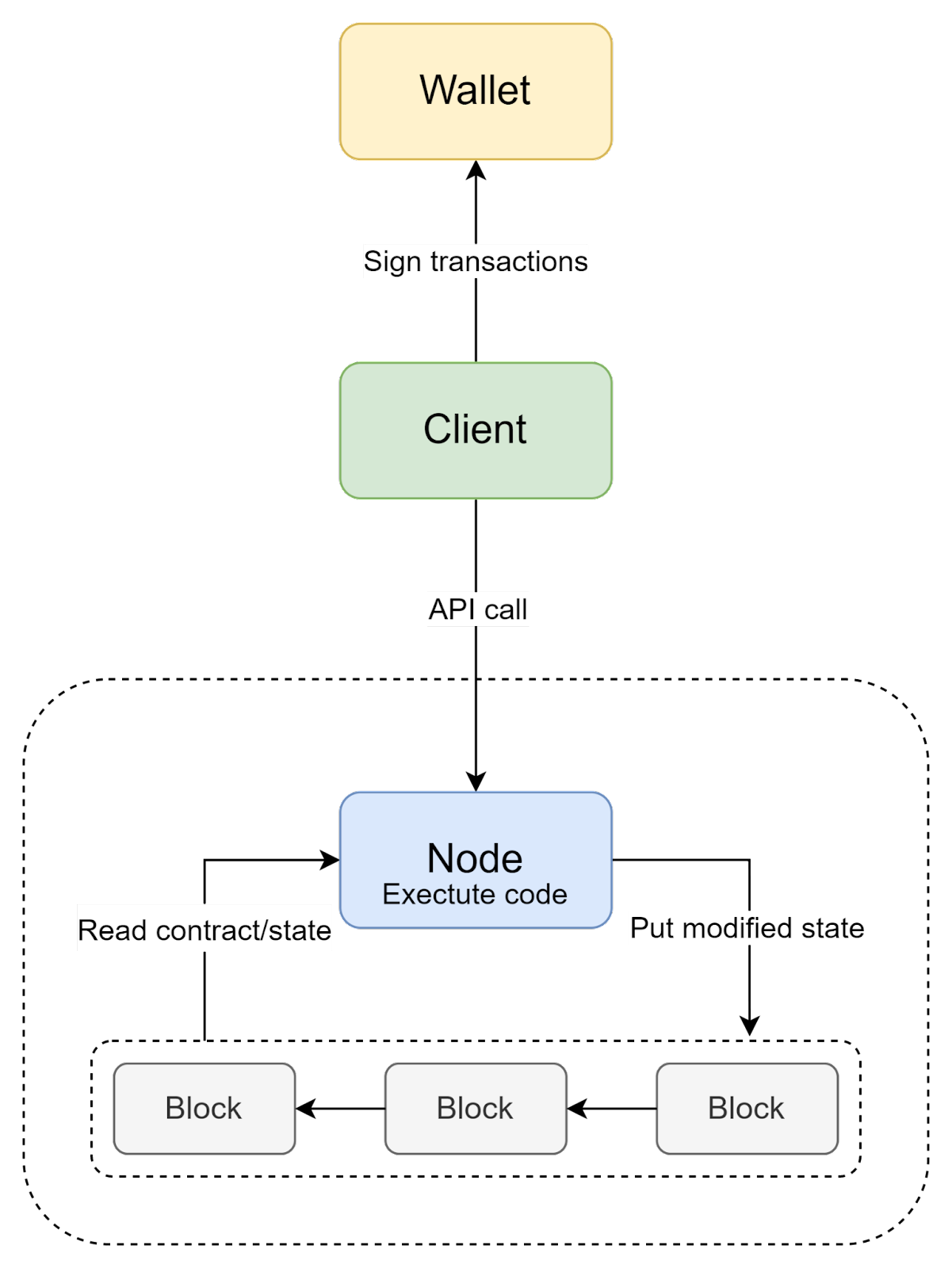 In a Web 3.0 model, users pay directly to the infrastructure provider (nodes running in the blockchain), bypassing the service provider.

This has huge implications:

But how do users pay? Since it’s a blockchain, they can’t pay directly with a credit card - in this way it will be tied to a central authority and not really decentralized. A solution is to use a decentralized currency - cryptocurrency. Each blockchain has its own currency, which is used for payments inside of it.

Whenever a user wants to perform an action on a blockchain by calling a smart contract, it should always pay an infrastructure cost, and optionally a service cost to the service provider.

However, the question still remains how users can obtain cryptocurrency tokens in the first place. One option is to buy it from other users who already own it by using traditional money or another cryptocurrency. There are exchanges which provide such kind of functionality, e.g. Binance. But this will work only if there is already an existing supply of tokens already in circulation.

In order to create and grow this supply the blockchain consensus mechanism is used. Earlier, we mentioned that it is used to incentivize blockchain network participation, but how exactly does it happen? Each node that processes transactions receives a reward for its work:

At a present day, two consensus mechanisms are commonly used:

At this point, we should have enough knowledge to proceed to the next chapter - choosing the best blockchain to build dApps.

There are a lot of blockchains out there and it might be hard to choose the most suitable one for your needs. First of all, we should define the most important characteristics for a chain:

Historically, the first blockchain to introduce smart contracts was Ethereum. However, as the number of users grew, transaction speed and cost skyrocketed, and it became apparent that it couldn't handle the demand. So, a number of scaling solutions appeared - layer 2 chains, sidechains, and plasma chains. However, they all use some kind of workarounds with their own unique drawbacks. Ethereum tries to fix the core problem and redesign its network - like switching to a Proof-of-stake consensus, which is ongoing for quite a long time, but exact timeline when all of the problems will be fixed is very unclear.

Meanwhile, a new generation of blockchains started to appear. They learned from the Etherium mistakes, and designed them from ground-up to be fast, cheap and scalable. Choosing the right one is by no means an easy task, but for us we found the NEAR blockchain to be an ideal solution, because of the following properties:

All of the further sections will use NEAR as an underlying blockchain, so before we jump into the intricacies of the Web 3.0 migration, we should take a closer look at it first.